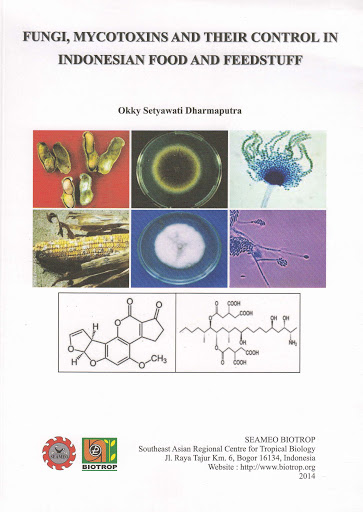 Fungi, Mycotoxins and Their Control in Indonesian Food and Feedstuff

Fungi, Mycotoxins and Their Control in Indonesian Food and Feedstuff by Okky Setyawati Dharmaputra.

Food safety is a global concern. Thus, any research to control food contaminations especially from fungi and mycotoxins is important.
Although there have been several researches done on fungi and mycotoxin contaminations and their control in food and feedstuff in Indonesia, the results generated are far from complete but enough to consider the subject matter as a serious problem. Aside from the need to conduct more researches, enhancing awareness of general public and policy makers on the problem should also be given utmost attention.
Thus, this book is aimed to disseminate research findings on fungi and mycotoxin contaminations and their control in various Indonesian food and feedstuff which have been conducted at SEAMEO Regional Centre for Tropical Biology (BIOTROP) and other research institutions in Indonesia from 1990 to 2013. The researches were on cocoa, coffee beans, milled rice, maize, peanuts, pepper, sorgghum, soybean meal, and salai patin at various distribution chains. The book also contains the regulation limits for mycotoxins in food and feedstuff in Indonesia and other countries for comparison.
The book is expected to be useful and be able to create more interest among students, educators, researchers, agricultural producers, food technologists, food and feed industries and entrepreneurs, and government regulatory agencies to work on ensuring safety of food and feedstuff in Indonesia.

Please fill the following information to download the publication