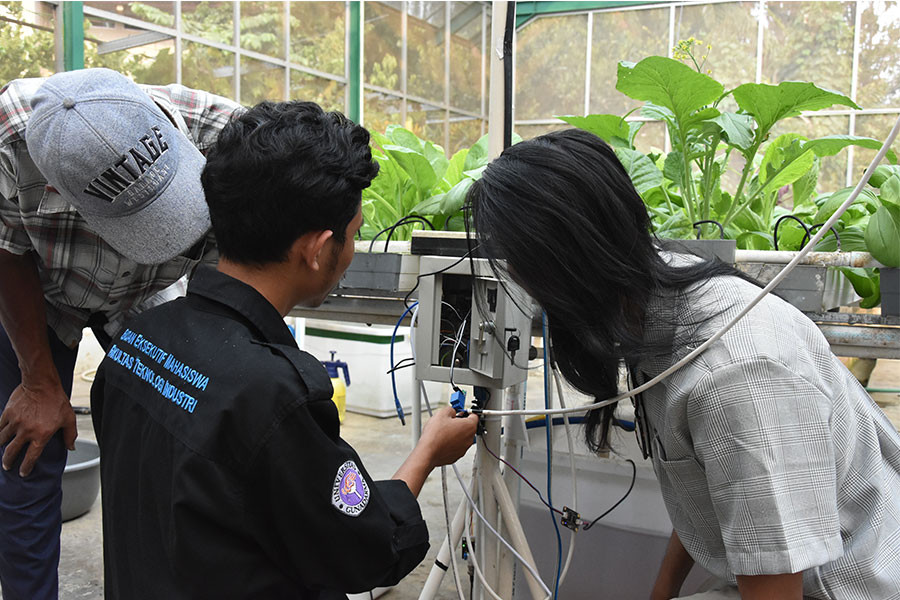 Hydroponics Laboratory of SEAMEO BIOTROP have currently been developing a prototype of smart hydroponic system. The first phase of the prototype had been developed in 2017, where its initial functions were to monitor several parameters used in the hydroponic greenhouse, namely: light intensity, temperature and humidity, and pH level. The second phase was done in the late 2018 until early 2019 to add the functions of monitoring and controlling TDS (Total Dissolved Solid), water level and temperature by automatically powering the wall-mounted fan in the greenhouse.

Smart hydroponic system is an improved version of the conventional hydroponics, where a layer of digital technology are added on top of the existing hydroponic system that makes it possible for the hydroponic system to communicate with the other systems, making it part of the internet of things ecology, that opens up whole new possibilities such as website-based monitoring, automatic control of connected periperhals, etc. Through this system, user will be able to automatically control the temperature, humidity, water level, and nutrient level as well as online monitoring through web based interface.

This digital system has many benefits, including: 1) less water used (as it only uses water when necessary), 2) electricity efficiency (by automatically power the pump, fan, and lights), 3) higher yield of crops (by keeping the ideal level of nutrition and temperature for the plant growth), and 4) less labour required (by making several tasks automatic).

Hydroponics itself is a breakthrough in plant culture system where water is used instead of soil as growing medium. In this system, the plants' roots are suspended in, flooded with or misted with nutrient-rich water which is delivered to the roots continuously to provide them with all nutrients the plants need for healthy growth. Hydroponics can be a cost-effective solution for people who only have a little space such in urban areas. It is also effective way to plant small herb, flower, fruit and vegetable plants which do not (or less) contain wood at their stalks and can be harvested in months.

“We would like to integrate digital technology with our expertise in order to have better output. This prototype is a good start. In the near future, we will complete it so the full scale of implementation can be established, not only in hydroponic lab, but also in other greenhouses and mushroom house,” said BIOTROP’s Deputy Director for Administration, Dr Zulhamsyah Imran after seeing the prototype’s trials.

MOMI CLOUDIA: Potential and Challenges for the Development of SEAMEO Center Indonesia